A parable about the nature of communication and the influence of language on teaching, and learning.

Reproduced here by permission of the author

Imagine, if you will, a huge compound, shaped like a wagon wheel...

Each pie-shaped sector of the wheel is an environment, with two spokes and part of the circumference forming the walls. The environments all have much in common with one another - water, trees, small plants, rocks, and the like - yet no two are exactly alike. They contain different kinds of trees, plants, terrain, and so on. Dwelling in each sector is one person who must survive in his own special environment.

In addition to a swampy section there is...

...and a rocky mountainous section.

At the hub of the wheel there is some machinery which can deliver small sheets of paper from one environment to another...

Let us suppose that the people in these environments have learned how to use this machinery to exchange crude sets of instructions with one another - instructions for making things helpful for surviving, such as tools, perhaps, or shelters, or foods, and the like.

But there is, in this story, absolutely no way for the people to visit each other's environments, or even to exchange samples of the things they construct. This is crucial.

The people can only exchange these crude sets of instructions...

These instructions are odd-looking blueprints scratched on special sheets of paper that appear from a slot in the hub and can be deposited in another slot, and nothing more. Indeed, since there is no way to shout across the walls of the sectors, the people only know of one another's existence indirectly, by a cumulative series of inferences.

Suppose that person A from the woods has discovered an implement that is very useful to him...

Say he has learned to build a rake and finds he can use it to clear dead leaves and other debris without damaging the living plants.

One day he draws as best he can three identical sets of instructions for fashioning his rake...

He goes to the hub and drops these sets in the slots for persons B, C, and D...

As a result, three people struggling along in slightly different environments, now receive these curious sheets of paper, and each one goes to work to try to construct what he can from them.

Person A's environment has a lot of wood in it, which is probably why he has leaves to rake in the first place...

Since the mountainous section is so rocky, the person in that section uses a lot of rock in his constructions.

He finds a piece of wood for the handle, but begins to make the head of the rake out of stone.

A's original rake head was wood. But since it never occurred to him that anything but wood would be available or appropriate, he did not try to specify wood for the head in his instructions.

When B is about halfway finished with the stone rake head, he connects it experimentally to the handle and realizes with a jolt that this thing, whatever it is, is certainly going to be heavy and unwieldly. He ponders its possible uses for a time, and then decides that it must be a tool for digging up small rocks when you clear a field for planting. He marvels at how large and strong person A must be, and also at what small rocks A has to deal with.

He then decides that one large prong will make the tool both lighter and better suited to unearthing large rocks.

Quite happy with both his bladed rock-pick and his new ideas about what this fellow A must be like, person B makes three identical sets of instructions himself, for his rock-pick, and inserts them in the slots for A, C, and D.

Over in another sector, person C, who is particularly interested in clearing out a certain swamp, has created, on the basis of these multiple sets of instructions - the hoe. After all, when you are dealing with swamp grass and muck, you need something that will slice cleanly through the roots. And person D, from the same sets of instructions, has come up with a gaff. He has a small lake and fishes quite a bit.

Although it would be interesting to get to know C and D, the primary heroes of this story are persons A and B. We return now to them for the climax of the great rake conversation, in which, to everyone's surprise, some real communication takes place.

A and B are committed to clear productive communication...

A and B, who have had profitable interchanges in the past, and thus do not mind working quite hard at their communications, have been caught up in this rake problem for some time now. Their instructions simply will not agree. B has even had to abandon his original hypothesis that A is a huge man who has only small rocks to deal with. It just does not fit the instructions he is getting. A, on his side, is getting so frustrated that he is ready to quit. He sits down near the hub and, in a kind of absent minded display of anger, grinds two sticks together. Suddenly he stops. He holds these sticks up in front of his eyes and seems to be thinking furiously. Then he runs to the hub and starts scribbling new instructions as fast as he can, this time using clever iconic symbols for rock and wood, which he hopes B will understand. Soon A and B are both ecstatic. All sorts of previous sets of instructions, not just about rakes, but about other things as well, now make perfect sense. They have raised themselves to a new plateau of inference about each other and each other's environments.

Keeping watch over the compound was a wizard’s apprentice, a well meaning but hapless wizard in training...

He was observing the exchanges among the different inhabitants of the compound. He saw the difficulty in communications and the frustration when each person saw the blue prints of others’ ideas and worked so hard to understand them. Being good natured, he wanted to try and alleviate the frustrations and hard work of the inhabitants. To do this most easily he cast a spell that made the inhabitants forget about the hard work they had experienced in the communication process.

He knew there was no way around the blueprints and the communication machine...

So, what he did was make it so that once, say, person A spent time and energy reading and following the blueprints, he would forget that he had that experience. Instead of having the memory of having put together the tool from the blue prints, each inhabitant only knew they had the finished tool, thinking it has come directly from the communication machine. He planted in them the false memory that the object had been sent to them directly from the other person, via a marvelous mechanism in the hub. Of course, this was not true. They still had to build the objects themselves, out of their own materials - but the wizard blinded them to this.

As it turned out, the wizard's spell was profound...

For even though, objectively, the communications system of the compound had not changed one bit, it nevertheless fell very quickly into disuse and decay. And as it crumbled, so did the spirit of harmony and communal progress that had always characterized the relations of A, B, C, and D. For now, since they would always forget that they had assembled an object themselves and thus bore a large share of responsibility for its shape, it was easy to ridicule the sender for any defects. They also began to spend less and less time working to assemble things, because, once the mental block descended, there was no feeling of reward for a job well done. As soon as they finished an assembly, the hypnosis would take effect, and suddenly, even though they were worn out, still, it was the other fellow who had done all the hard, creative work of putting it together. Any fool could take a finished product out of the chamber in the hub. So they came to resent, and therefore abandon, any assembly jobs that required real work. But this was not the worst effect foreseen by the magician when he cast his peculiar spell. For, indeed, it was not long before each of the persons came to entertain, privately, the idea that all the others had gone insane. One would send instructions to the others for some device of which he was particularly proud, just as he had always done. Only now of course he believed that he sent, not instructions, but the thing itself. Then, when the others would send him instructions in return, to confirm their receipt of his, he would assemble the object, forget, think that they had returned him the thing itself, and then stare in horror at what he saw. Here he had sent them a wonderful tool, and they returned to him grotesque parodies. Really, what could explain this? All they had to do was to successfully remove his object from the chamber in the hub. How could they change it so shockingly in performing an operation of such moronic simplicity? Were they imbeciles? Or was there perhaps some malice in their behavior? Eventually they all came privately to the conclusion that the others had either become hostile or else gone berserk. Either way, it did not  matter much. None of them took the communications system seriously any more.

After some time A was wandering near the communication machine and noticed all of the small papers from the many communications among him and the other inhabitants of the compound laying on the ground. He didn’t recognize what they were immediately, but as he thought about what they could be, he started remembering what they represented.

They were the communications, the multiple iterations necessary to achieve mutual understanding…

His memory started to return of the hard work that it took to interpret plans and build based in them, and to develop plans that could be most likely interpreted as intended by the others. He began to see the communication machine for what it really was, a device for transferring symbols only, not the product; that the real work of communication was in the interpretation of those symbols; that meaningful communication was iterative and quite labor intensive.

How would he let the others know?

Using this story in the classroom

Can you grasp this concept?

Let me see if I can put my thoughts into words.

I will deliver my lecture at the conference.

In reality, the listener must make meaning of their perceptions. They do this by utilizing their personal context and past experiences and assimilating or accommodating the new information. There is no way for them to know exactly what the presenter is thinking. As became obvious in the parable, it took great effort and dialogical (back and forth) communication for the two parties to arrive at a more-or-less shared understanding. For example, when the presenter says, “dog,” the listener will think of “dog.” Though both conceptions of “dog” will not be identical, but close enough where the two can converse reasonably about “dog.”

To use this story as a teaching tool and explore these ideas of communication and how it pertains to teaching and learning, please see the presentation here. 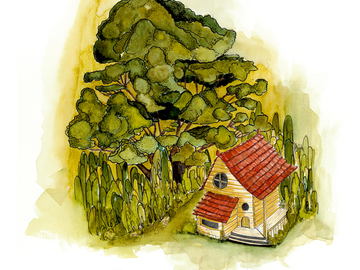 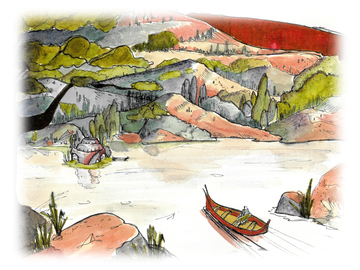 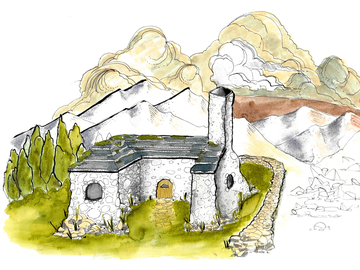 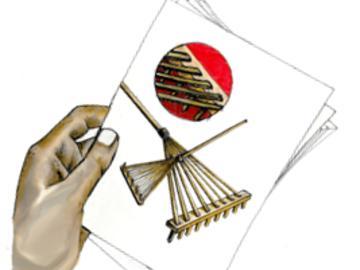 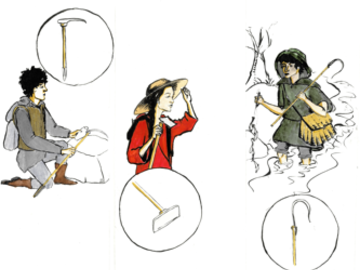 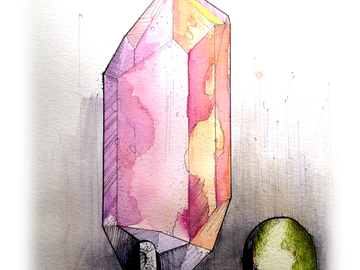 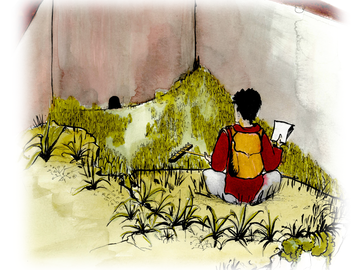 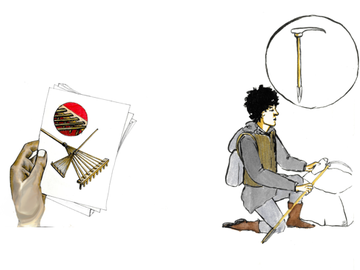 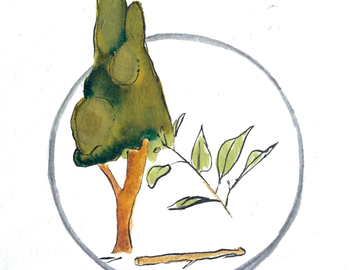 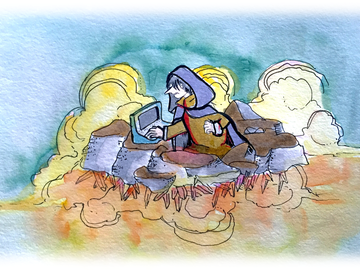 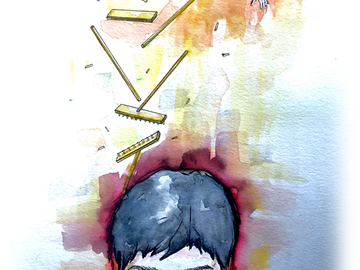 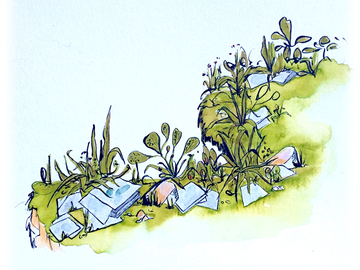 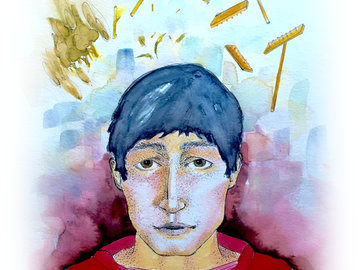 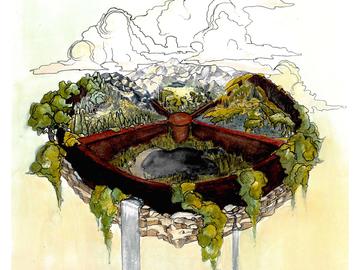